While we are sad about Tushie not being pregnant.....we do have a litter Due October 26th Between SASE (Abadessan's Signed Sealed Delivered (11 points both majors towards her AKC championship)) and Brady (Cosmos Let's Celebrate AWD (Brady was Winners Dog at the 2012 National under breeder judge Steve Dostie.  As well, Brady recently earned his Junior Water Dog and Apprentice Water Dog titles!).

Expect Wavies (outside chance for curly), Black, Black and White, and maybe Parti.  An in-person meeting is required to be considered for a puppy. 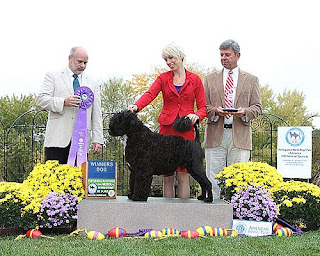 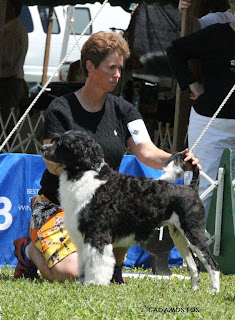 Posted by Cnsand PWD at 8:42 AM No comments:

Sadly Tushie is not pregnant.

Unfortunately Tushie is not pregnant...thus the expected litter (due end of September) between Tushie and Otto is no longer.    I can't thank Richard and Anne enough for all their efforts in trying to accomplish this.   Thanks also to the Swenson's and Otto.    We are all saddened by this news.    Tushie will be spayed and will continue as Anne's partner as a therapy dog.  Something Tushie excels at!!!   Thankfully we have Tushie's son sawyer..so we don't lose those amazing genes.
Posted by Cnsand PWD at 8:33 AM No comments:

Tushie (Ch. Cnsand Don't Squeeze the Charmin, Black Curly ) has been bred to Otto (Ch. Cnsand Bass Ackwards, Black and White Wavy).  Pups due End of September.  Tushie is OFA Good, PRCD PRA Clear, Current CERF, JDCM Carrier, IC Carrier.  Otto is OFA Good, PRCD PRA Normal, JDCM Normal, IC Normal, and GM-1 Normal.  Otto's CERF exam is expired a new one will be done soon.   The combination of Otto to Tushie is genetically incapable of producing PRCD PRA, JDCM, GM-1, or IC because at least one parent is genetically tested as a non-carrier for these simple recessive diseases.  Expect Wavies and Curlies, Black, Black and White, and possibly Parti Color.   An in-person interview is required to be considered for a puppy.   Email me at CnSandpwd@aol.com for more information. 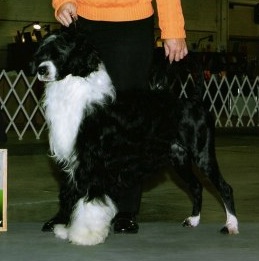 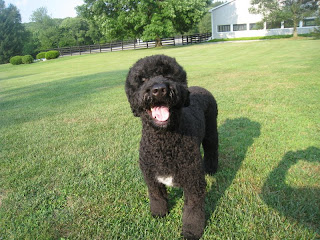 Posted by Cnsand PWD at 7:15 AM No comments:

Dear Portuguese Water Dog Breeders and Fanciers,
In February of 2012 Mrs. Anat Cunha of Barrington, RI, breeding under the kennel name Karma filed suit against me in the Superior Court of Providence County in Rhode Island.
In this suit, Mrs. Cunha is seeking my removal as Co-Owner of all dogs that we currently Co-Own.
My Co-Ownership was a requirement of purchase of Wayfarer CnSand Pure Karma (Cnsand Bass Ackwards x Akire Gotta Lotta Moxie) pursuant to a written contractual agreement between Mrs. Cunha, Patty and David Gault (Wayfarer), and myself (CnSand). In addition, as an agreement of purchase of Wayfarer CnSand Pure Karma, Mrs. Cunha agreed to have all offspring produced placed on spay/neuter contracts unless permission was given by both Patty and David Gault (Wayfarer) and myself (CnSand).
Mrs. Cunha is also seeking my removal as Co-Owner of Karma CnSand the Beat Goes On (DownEast Lord of the Rings x Wayfarer Cnsand Pure Karma), a puppy produced from a litter I arranged with my long time friend, Steven Dostie (DownEast). My Co-Ownership of Karma CnSand the Beat Goes On was a requirement of the Stud Dog owner, Steven Dostie (The DownEast Stud Service Agreement required all puppies from this litter to be placed on AKC Limited Registration with spay/neuter requirements, and the ownership and physical possession of one show and/or breeding potential female puppy is allowed as long as the puppy is co-owned by all bitch owners, thus contractually requiring me to remain a co-owner of this bitch).
Wayfarer CnSand Pure Karma was bred to Floodtide’s Meet Me at Dockside.  Mrs. Cunha did not receive permission from me for any of the resulting puppies to be placed on anything other than a strict Spay/Neuter Contract.   Mrs. Cunha was able to register 9 of the 10 puppies on Full Registration with the AKC.  The AKC agreed to list me as Co-Owner of all of the dogs that were fully registered in this litter.  Mrs. Cunha is also seeking my removal as Co-Owner of all these dogs/bitches (all dogs will be listed by AKC name and AKC registration number at the conclusion of this letter).
Mrs. Cunha bred Karma CnSand the Beat Goes On (a bitch I co-own as mentioned above) without my knowledge, approval, or input during this ongoing litigation. The resulting litter was born 4/28/2013. On June 5, 2013, I was notified by the AKC that Mrs Cunha attempted to register the litter with the AKC.   Per AKC rules and regulations, I was contacted to obtain my approval and signature  as co-owner. I explained that Karma CnSand the Beat Goes On was involved in an ongoing lawsuit and that I would not be signing the litter registration.   I provided the AKC with copies of Mrs Cunha's Court Complaint and my response to the Complaint and Counterclaim.   The AKC responded on July 12, 2013 that they will not make any decisions in regards to the registration of the litter until after the case has been resolved.   Mrs. Cunha placed all of the puppies from the litter at 8 weeks of age.   I do not know where the puppies were placed, nor do I have any first hand knowledge of any contractual promises to or requirements of the new owners that Mrs. Cunha has made.
I Co-Own the following dogs and do NOT agree to their being bred.  Mrs. Cunha has refused to agree to not breed the dogs listed below until after the lawsuit has been settled, thus I feel it is necessary to inform my fellow breeders and fanciers that I do NOT approve of them being bred and I have had no input in breeding decisions for them. In addition, I will NOT agree to sign any litter registrations resulting from them being bred.

Thank you for your attention to this very important matter. Please feel free to share this information with any breeder/fanciers that may not have received it.

Posted by Cnsand PWD at 9:37 AM No comments: